skip to main | skip to sidebar

This is Wil's wife, Tammi.

Wil enjoyed many things in life, writing was one he loved dearly.

Hanging out at Truck Works of Maine ... 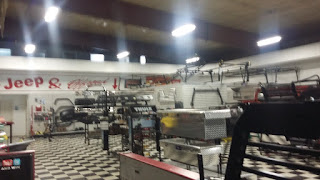 While the techs install new running boards to replace the OEM units which failed when SAMBO stepped on the drivers side a couple weeks ago tomorrow. Later that day, I opened my left leg from ankle to knee when another piece broke off as I got out of the truck. 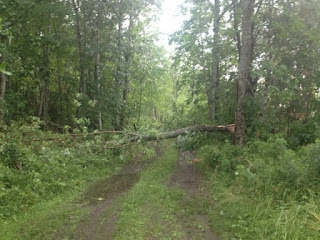 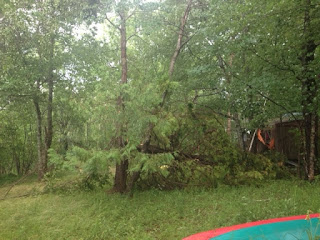 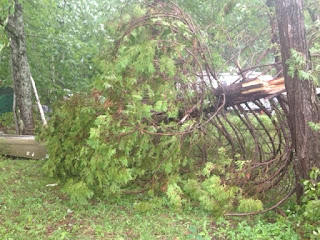 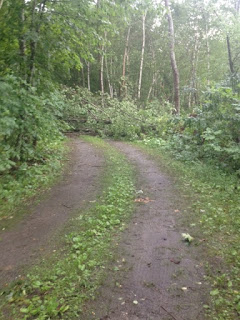 Amid tornado and severe thunderstorm warnings this afternoon, SWMBO and I battened down the hatches and held on as the closest shelter is six miles away. The line wall hit us broadside with heavy, 60+MPH winds, dime sized hail and gusts of rain reminiscent of a high pressure car wash. The pressure differential was sufficient to overcome the gears for the ceiling vent fan covers, causing them to flap like so many Republicans in Ohio. The fifth wheel rocked side to side like Hillary waffling on immigration reform.

Then it was over. Oh, heavy rain continued with gusts in the 30 to 40 MPH range for another hour, but for all intents and purposes, the fat lady had taken her bows and left the stage to her understudy. I went and lay down for a nap. An hour or so later there was a loud pounding on the door ... Neighbors up the road had hiked in when they noticed the road in was completely blocked by downed trees! After assuring them we were fine and did not need to go out tonight, they left to get a chainsaw and tractor to yard the half dozen oak and ash trees blocking our drive in three places. I went out and helped for a few hours hauling severed limbs out of the road. Sadly, I'm about as useful as tits on a bull, hauling one limb to others' five, stopping to get enough oxygen to do more than stand to the side wheezing my one lung up.

After all was said and done, my neighbors came through 150% in our time of need, for which I am extremely grateful. We can get out; ambulances and fire trucks can get in and I only have a week's worth of clean-up ahead of me.

And So It Goes. 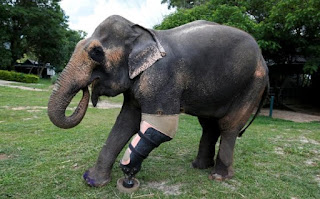 A photo essay in the International Telegraph caught my eye today and I'm sharing the link. These two elephants are just two examples of the carnage by left-behind mines, whether from revolutions, anarchy or international conflicts, the damage is the same.
And So It Goes...
Posted by Wil at 2:49 PM No comments:

You Want To Put What, Where???

So, it's Spring in Maine all of a sudden. One week we're pushing ice out of the way of the boat and the next we're in a fight for our life with a mosquito named "Ziki" carrying an AR-15 and a copy of the Koran, arguing the prophet's interpretation with a moose fly the size of a Buick while a phalanx of the infamous black flies of ISIL fame are attempting to lop off my head with their scimitars.

And then I wake up.

It's Wednesday morning and that means it is time for Iggy's appointment with the Vet for shots and the like. Off we go down the lane, with the previously cited moose flies (similar to horse flies only larger with filed teeth) holding on to the truck mirrors as they scream epitaphs like "Death to the Infidels", "Eat Mor Chiken" and  "Allah akhbar Khan". Or maybe it's just the buzzing in my ears.

Realizing where we have turned in to stop, Iggy's joy at going for a ride in the truck is replaced with a sullen "You'll get yours, buster" as he slinks out of the back seat. In through the doors we go, yours truly dragging the reluctant hairy pig, parallel grey scratches on the pavement where he tried to express resistance, He shares a butt sniff with an apricot mini-poodle on her way out and settles in to cowering against my leg awaiting his turn.

Soon enough, Dr. O. is ready for him. She's been his vet for 5 years and despite his disregard, actually likes the little twerp. He allows me to lift him onto the scales where we discover he currently tips those scales at 45 POUNDS!

Oh my. Breed standard specifies </= 30 lbs. for male schipperkes. Last visit (two years ago; he saw a Baton Rouge practitioner last year) he weighed 32 lbs. and we were chastised for allowing him to get so fat then.

Surprisingly, Dr. O just tsk'ed and continued with the jabbing and poking. Then came the moment he was afraid was coming. New gloves and a great glob of K-Y jell on the Vet means only one thing. I held him tightly and she applied the jell in a judicious fashion to the orifice capable of accommodating her index finger. He turned red -- no mean feat for a black dog, let me tell you -- and expressed his indignation by chewing through my bicep while Dr. O expressed his anal glans. A quick swipe or two with a baby wipe and the indignity was over and he was all cuddles as she sympathetically offered him a biscuit. Me, he didn't have the time of day for.

I ran him outside into the truck so he didn't have to repeat the whole shaking and whining thing in the waiting room as I waited to pay the bills. And ouch, they got you (me) by what few short & curlies I still have. It cost almost four times as much as my personal doctor charges for an office visit.

The things we do for pets... 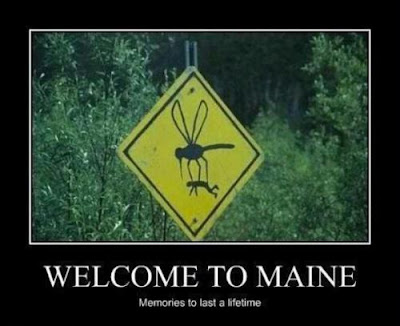 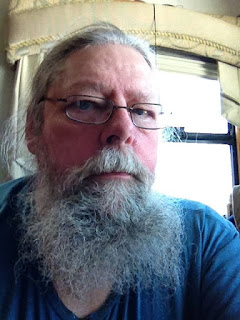 The Second Day of Spring My True Love Gave To Me...

Six inches of snow and open water on Pushaw Lake. An odd combination, to say the least. Ice went out a week ago, Sunday. That's a week before Spring and just maybe the earliest date in living memory. The gravel roads are a tiresome slog of mud. Got stuck last night when we turned in off the paved road and I parked to get the mail. Tires were warm from the pavement, snow was unplowed and that makes for a very slick combo. SWMBO had to get out a fish out the shovel and dig out a path for the rear dualies to follow onto the packed down snow of previous travelers. Since heart attack, shoveling is on my "Forbidden List" so she gets that nasty chore.

SWMBO snapped the following from inside the cab of the truck while I was turning off the generator before going in to town. Happy Spring 2016, y'all.

Weather - Jack Frost is adding injury to insult with another 6 - 12 inches of snow forecast for this afternoon through tomorrow, 20 to 30 MPH winds from the NE so downed trees and the like a real possibility as that isn't a usual wind direction for us. All on top of the 12" we got three days ago. And I swore to all deities above and below I'd never spend another winter in Maine. A fat lot of good that did me.

It's danged cold in this trailer and we haven't any option but to sit it out until Spring. Ground never froze hard before snows came, so moving the trailer is out of the question as my 2wd truck would sink out of sight. I look at the weather in Texas (Port O'Conner) and Louisiana (Baton Rouge) and just want to cry.

Health has been the bugaboo for me and the missus since summer. Oh joy, now I have medicare, so medicos are up to old tricks of testing, poking and prodding. Going under for a colonoscopy in mid-March. I do hate the prep for that test. The test itself is undignified but anticlimactic. All the real fun occurs in the 36 hours prior to insertion of the camera in the bung hole. SWMBO has had a chest infection that refuses to quit. Her FNP is the laid back, "let's wait and see" type. Not a good fit, but no alternative exists at present.

Iggy has decided that the floor is too cold so he only stands on it to eat or go outside to do the necessary. The rest of his time is spent next to SWMBO on the sofa, on my lap (ouch - he's topping 48 pounds these days) or in bed when we are asleep. Really hates the snow - has taken to going under the trailer for squatting so snow isn't tickling his butt.

Miss you all, family, friends, and blog readers. Often in our thoughts, but no phone and only what internet I can steal from neighbors limits contact. So be good. If I don't pop in with an update by June, email your complaints and concerns. Who knows. I might even reply!

Darkness prevails, despite the passage of sunrise, the clouds so thick the rose rays of dawn find no breaks in the cover. Rain pelts steadily on the hatch cover echoing loudly down the vent plenum, thudding softer across the trailer roof. The autumn monsoon has begun.

Waterfowl seasons began at dawn, yesterday. SWMBO was vocally unhappy about the twenty-one shotgun salute around us as eager Nimrods blasted the ducks to smithereens in the cove. Not the case today. The weather and bombardments have driven the local quackers to seek safer, more sheltered quarters. So far, knock wood, the hunters have chosen to stay in bed this morning. Time will tell if it's warm blankets or the wet darkness that holds them in abeyance. 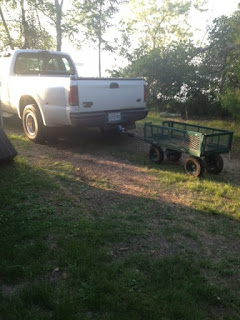 Found in-between Maine and Louisiana, this curmudgeon hides in his aluminum hole by day, emerging at night to frolic and fornicate in the moonlight...


When he gets off the couch!

Wil
Well past (by at least a decade) the half century mark. One foot in the grave, the other on a banana peel at the rim of the abyss and the view from here is disconcerting. I am a former student, pearl diver, cook, truck driver, firefighter, EMT, CEO, Town Fire Warden, mechanic, oiler, marine engineer and computer whiz bang. Mostly I sleep these days in an aluminum tube. And So It Goes... I waste my time reading blogs and kvetching about the weather, playing with our Schipperke sidekick, Ignatz McGraw and waiting hand by foot upon my wife, the Queen of our Hovel, She Who Must Be Obeyed (SWMBO).

Find me on MySpace and become one of my friends!

There are many types of magic, but all require a sharp mind and a cool head. There is no puzzle I can't solve, no problem I can't think my way out of. When you feel confused or uncertain, you can always rely on me to untangle the knots and put everything back in order for you.

How about you? Click here to find your own inner hero

Save the Planet
Kill Yourself

Church of Euthanasia
The One Commandment:
"Thou shalt not procreate"